Home » Herbal Wisdom » What My Garden Has Taught Me…

What My Garden Has Taught Me…

Right now my garden is frozen over with snow, a beautiful sight. I am excited for another year to play in the garden and see what she will communicate with me. Right now earth says, “Not yet….wait a little longer.” 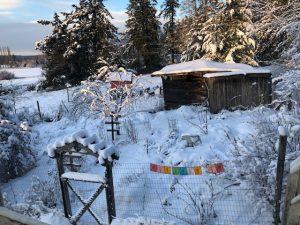 A number of years ago, I had a helper in my garden and she quit at a time when I most needed a helper to keep the garden cultivated. I freaked out. But only for a very short time. Something else was there for me and I could sense its energy.

Instead of finding a new helper for mass cultivation, weeding and planting….I let the garden go wild, completely. I started calling it rewilding. I had gotten hints of it before this person quit. And she may have quit because I wouldn’t let her do the typical garden helper tasks. I told her not to disturb the soil too much because of all the micro-organisms that I wanted to protect and so I was very controlling about what I needed. In the years to come, I have found wonderful garden helpers who have studied with me and are tuned in with my unusual gardening techniques. 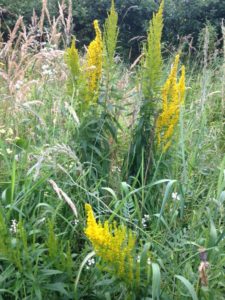 You see, I had found a discontentment in the garden. I had this conflict about what I thought should be there growing and what the garden, the land and the plants were communicating with me. The rewilding allowed me the opportunity to listen to what the garden wanted. I followed.

At this same time, a friend sent me a book, “One Straw Revolution” by Masanobu Fukuoka. What he wrote about in his book was what the land was teaching me. He wrote, “The usual way to go about developing a method is to ask, ‘How about trying this?’ or ‘How about trying that?’ Bringing in a variety of techniques, one upon the other. This is modern agriculture and it only results in making the farmer busier. My way was opposite. I was aiming at a pleasant, natural way of farming which results in making the work easier instead of harder. ‘How about not doing this? How about not doing that?’ that was my way of thinking. I ultimately reached the conclusion that there was not need to plow, no need to apply fertilizer, no need to make compost, no need to use insecticide. When you get right down to it, there are few agricultural practices that are really necessary.” I found his book to reflect Taoism…allowing life instead of forcing life. This is also the wise woman way of wholeness and holiness right where we live. 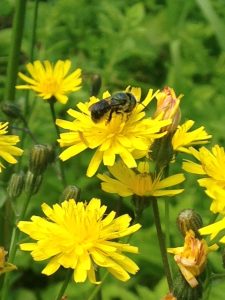 Insects became apparent as messengers. Around the same time that I lost my garden helpers, I had attended the Fairy Congress in Eastern Washington. Every time I sat down to eat a meal, I met a new bee keeper. I listened to many stories about the bees over the weekend. And when I returned to my garden, I realized that the bees were communicating with me. I had had an agreement with the yellow jackets for a few years. I told me they could be near the garden with their nests as long as they didn’t disturb me or my apprentices. And then something happened. As I checked out the oatstraw I had planted and noticed that it was ready for harvest, a yellow jacket came buzzing around me. I could feel it had something to tell me. And it did tell me that it wasn’t time to harvest the oatstraw…to wait until it turned golden before harvesting. 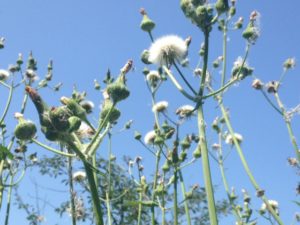 Soon, I was communicating with the ants that came into our house and the tent caterpillars that voraciously came onto our land. Each of these creatures came for a reason and I could discern this with shamanic communication.

During this time of rewilding, the weeds in my garden became a powerful presence. The dandelion, the sow thistle, the lamium, the chickweed, and soon, wild amaranth, lamb’s quarters, pepper grass and then more weeds appeared. The Canadian thistle became somewhat of a symbol for feminine energy on the land. The flower’s fragrance is exquisite, the leaves and flowers make wonderful nourishing vinegar and the downy seeds are like the hair of the goddess. 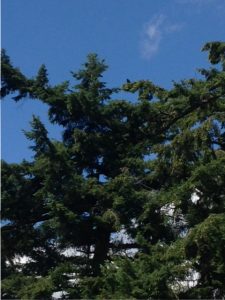 Native plants became more and more powerful for sharing their compassionate wisdom with us. The wild roses saved us every year with their beautiful blossoms and then deep red rose hips. The trees were prominent teachers for us. The Douglas fir power animal tree has become a beneficent protecter. The incense cedar nourishes us with her delicate wisdom. And our apple tree, where we hold our outdoor classes, infiltrates our psyche’s with love and compassion.

And there is the blackberry. This plant, especially the non native Himalayan blackberry is the earth keeper here at our farm. It is holding the land for us. We are working with it as stewards of the land. I harvest the leaves for tea and the goats love them.

As I have allowed myself to listen to the garden and follow her lead, I have experienced a great deal of contentment in the garden. The soil is alive with life force and nutrients for plants growing and for itself.

The invisible is the most potent presence in the garden and on the land here. Each plant, ea 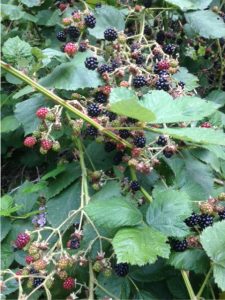 ch being is treasured. We listen much more than we speak about what we know. We acknowledge the mystery.

As the years have past since this first rewilding, I have begun to cultivate certain areas of the garden. Still there is much wildness. The cultivation is arising from the invisible and so it is authentic with what the land requires.

I am still in beginner’s mind about this. I feel this is the best approach to learning this non method of gardening. Sometimes I still feel anxious about the way it looks. When this happens, I realize I need to slow down and breathe and open my consciousness to listening again and again.
So, today as I look out over my frozen-with-snow garden, I wonder what gifts the garden will share with me this year. And I am very grateful.